What are the implications of Brexit?

Preparing for Brexit is no easy task, because no-one really knows exactly what the UK's exit from the EU will actually be like. But keeping informed, maintaining good stock levels in the UK and ensuring additional administrative resources are in place is a good start.

Predicting the consequences for the wood industry in general, and Setra in particular, is of course extremely difficult, particularly since no-one really knows yet what kind of Brexit it's going to be. It could be hard, soft or anything in between. What we do know is that the UK is a big import market, and whatever kind of Brexit happens the country will continue to have a significant need to import wood and other products.

"Roughly 200,000–250,000 homes are built every year in the UK, and that need isn't about to disappear with Brexit. If the UK economy sees a decline as a result of Brexit, which some analysts are suggesting, it could have a negative impact on new construction. In such a situation, however, a growing home improvement sector could compensate to some extent," says Olle Berg, Director of Market & Business Development at Setra.

One thing we can be certain of, whatever form Brexit takes, is that new trade agreements will be needed. Issues such as customs clearance and VAT regulations will most likely be more complex while these new agreements are being put in place.

"There's no doubt we will eventually enter into new agreements. We all want to continue trading with one another. But the question is how we will get there. Is there sufficient administrative capacity on the UK side to manage this during  the transition period? And what's the situation in Sweden?" says Olle Berg.

The government and trade associations such as the Swedish Forest Industries Federation are working on several levels to create the best possible conditions for the Swedish forest industry. As far as Setra is concerned, it's mostly a matter of following the course of events and responding to the information that emerges.

"It's basically impossible to prepare for something when you don't really know how it's going to be.

"But of course we're going to make sure that our stock levels in the UK are high in March, and that we are well prepared with extra administrative resources should they be needed," says Olle Berg.

Olle Berg doesn't feel there is any need to compensate in advance by increasing business on other markets.

"The UK needs our sawn wood products and I'm confident that trade will continue, although it may be a little more complicated in purely administrative terms. We have well-established relationships and I know that everyone involved will do their best to ensure everything goes as smoothly as possible" says Olle Berg. 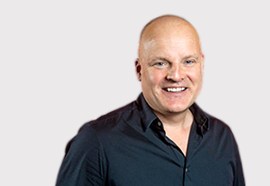 "The UK will continue to have a
considerable need to import wood along with other products, regardless of how Brexit pans out," says Olle Berg, Director of Market & Business Development at Setra.