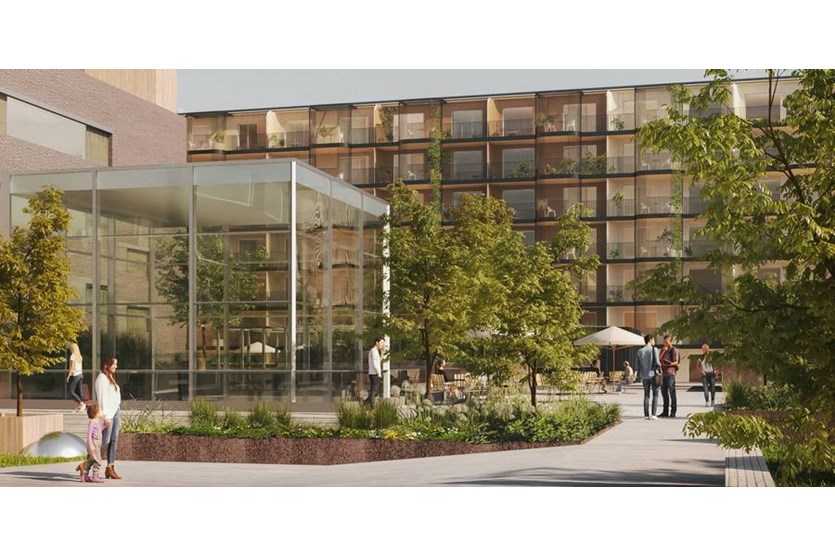 Setra has been commissioned to supply locally produced CLT and glulam for the first phase of Greenhouse Sthlm, a climate-smart development by Electrolux on Kungsholmen in Stockholm. The contract is for around 5,000 cubic metres of CLT and 600 cubic metres of glulam, which will be manufactured at the Setra Timber Industry Centre in Långshyttan, Dalarna. Deliveries are set to begin in 2023.

Electrolux is expanding its headquarters in central Stockholm over the next few years. Under the name Greenhouse Sthlm, the entire block will be transformed into a greener and more sustainable neighbourhood, which will include 100 new apartments and rooftop growing beds.

“We are proud to be involved in this influential project, which echoes our strategy for sustainable wood products in the construction industry. From the Setra Timber Industry Centre in Långshyttan, we offer specialist expertise in many areas to do with timber-framed building. Whether for offices, housing or public buildings, the construction industry is moving towards more sustainable material choices, with wood as a key player,” says Daniel Halvarsson, Setra’s SVP Building Solutions and Components.

The project comprises a gross area of 14,000 square metres, of which 8,000 will be office space and 6,000 will be apartments. The structural frame for the office building is being delivered as a turnkey contract in partnership with ByggPartner, while the apartments will be made in modules by Nock Massiva Trähus. Archus is the practice behind the architectural work.

“ByggPartner has already established a close partnership with Setra and in this case we’ll be assembling the timber frames on behalf of Skanska. One of the things that makes Greenhouse Sthlm such an interesting project is the way the client, Electrolux, is making highly informed and conscious choices,” explains Andreas Vestlund, ByggPartner’s commercial project manager.

This is confirmed by Ulrika Kågström, Facility Manager at Electrolux.

“As a leading company in the field of sustainability, we want to make our own contribution to urban development and to more sustainable building and living. Using wood from the forests of central Sweden allows us to reduce the climate footprint of the new buildings. We hope the development will live on for many generations, so it can store carbon dioxide for a long time to come,” she adds.

The climate-smart timber frames also play a prominent visual role in the glazed facades. “Wood is a fantastic material in so many ways! There’s a special feeling when you walk into a building made of wood, and that’s something we’ve chosen to accentuate in the architecture,” says Ulrika Kågström.

About Setra’s production facility for cross-laminated timber
The production facility for cross-laminated timber is part of the Setra Timber Industry Centre in Långshyttan, southern Dalarna. The site also produces glulam and wood components. Setra’s value chain from the forest to the finished wood products is extremely short, delivering a low carbon footprint. From the factory in southern Dalarna, the deliveries are run by a company only using biofuels to serve Greater Stockholm and the Mälardalen region. The structural elements are delivered in exactly the right order for highly efficient assembly on site.

About Greenhouse Sthlm
The innovative construction project Greenhouse Sthlm could be described as a green city within a city. On completion in 2033, around 3,000 people will work and live in the neighbourhood, which will also include a new square and retail space for a restaurant, a cafe, shops and a gym. The entire regeneration project focuses on green and climate smart solutions – and most of it will be built in wood. As a result of this conscious sustainability drive, the new buildings will also be obtaining environmental and climate certifications: BREEAM Outstanding for the offices, the Nordic Swan Ecolabel for the apartments and NollCO2 for both. NollCO2 is the Swedish Green Building Council’s new certification standard for climate-neutral building.