As building in wood becomes an increasingly popular choice, demand for strength graded construction timber is also on the rise. This is timber that is graded on the basis of its specific properties and therefore can be used in load-bearing structures. For this issue’s Wood School, we talk more about strength grading, what affects load-bearing capacity and what the most common classes mean.

Since wood is a material created by mother nature, it is not possible to control its properties by adjusting the production process. Instead, the properties of the wood have to be assessed and the material graded accordingly. Strength grading involves picking out the timber that meets the requirements for load-bearing structures.

What is construction timber?

There are currently two techniques for strength grading – visual grading and mechanical grading, with the latter being the most common. Construction timber for structural use is produced in the strength classes C14, C18, C24, C30 and C35, which form the manufacturing standard for Swedish producers. The numbers represent the bending strength expressed in MPa (MegaPascal) and indicate how much force per square metre the wood can be subjected to without it breaking.

How can I tell the strength class of the timber?

Construction timber must be labelled with the strength class, the company of manufacture, the time of production and the CE mark. Each plank should be marked individually, with the whole pack of timber also labelled, plus a performance declaration should accompany the products. The CE mark means that the performance values declared for the product were obtained in accordance with a common European standard and is mainly intended to facilitate trade within and to Europe.

What should I use strength graded timber for?

C24 is the most common class and means that the timber can take high loads and be used in load-bearing structures such as floors, roof trusses, external walls and ceilings.

How does strength grading work?

The most common technique for mechanical strength grading is called ‘tapping’, where a kind of hammer taps one end of a piece of wood as it passes along the production line. Next to the hammer is a microphone that captures the sound formed by the vibrations in the wood, while at the same time the length and, in some cases, the density of the plank are measured.

For Setra’s new trimming and planing line in Hasselfors, a fully automated scanner solution has been chosen instead. With this system, the strength grading is performed using cameras and laser points to measure the grain of the timber, with the assessment then based on the images collected.

What factors affect the strength?

One of the factors that determines the strength of the wood is its density, which in this case means how tightly packed the material is. The higher the density, the greater the strength. The lower and outer parts of the trunk are denser. A greater proportion of summerwood increases the density and factors such as speed of growth, soil conditions and tree spacing also make a contribution.

Knots and cross grain push the fibres in the wood out of line, which reduces the strength. Splits and reaction wood are other defects that have an effect. Reaction wood is formed in conifers to straighten them up when they grow against some force or other, for example if they are on sloping ground.

Sorting the material into different strength classes makes it possible to:

Europe uses C classes from 14 to 50 to show how strong the timber is, but wood up to C30 is mostly used in practice. Setra’s assortment ranges from C24 to C40 for both planed and sawn products, with C24 in greatest demand. 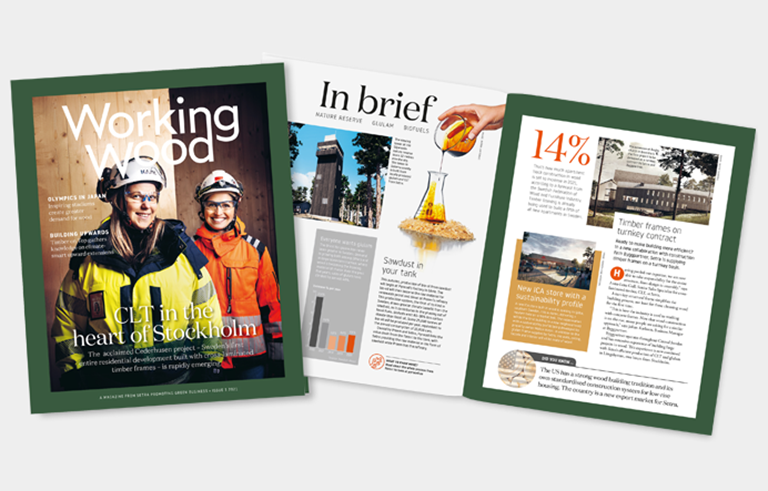