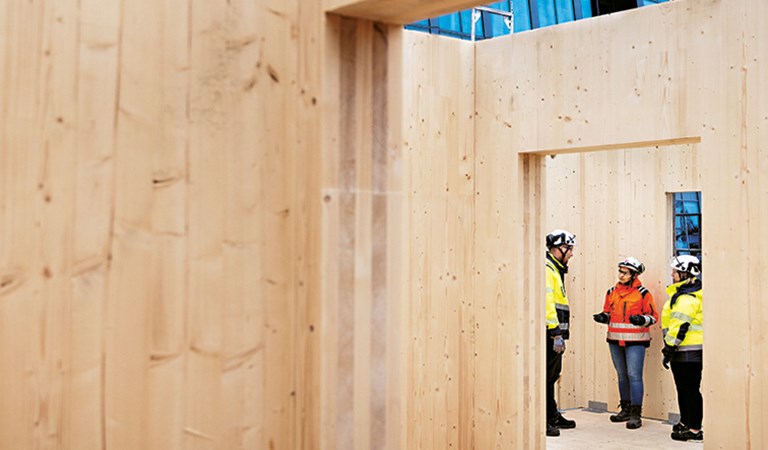 One of the lessons from the project is that the erection of the wooden frames went faster than planned, and at times the work has been ahead of schedule. 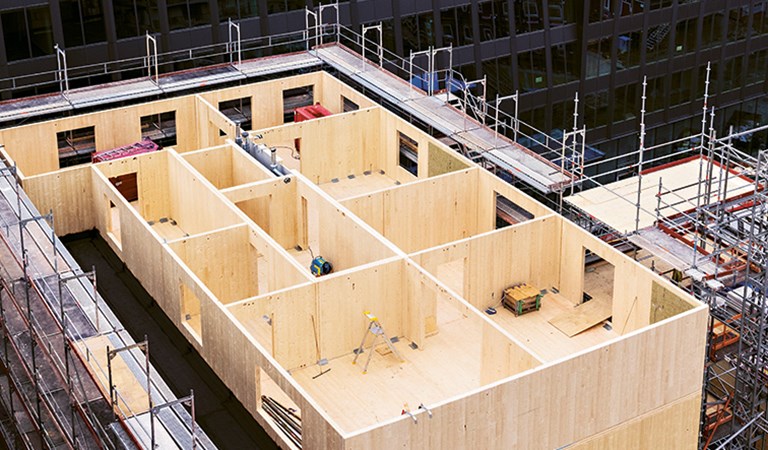 The wall units are delivered to the construction site in finished dimensions. The largest elements are about 3 metres high and 12.3 metres long.

Follow the construction of Cederhusen in real time via the City of Stockholm’s webcams: webbkameror.se/byggkameror
- Choose Hagastaden. 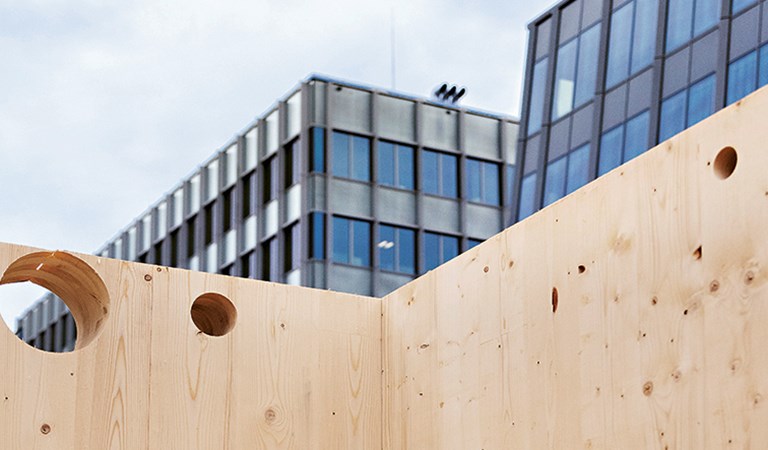 With a wooden frame

Architects and structural engineers. Builders and home buyers. Many are following the Cederhusen development in Stockholm with interest, as one of the largest, climate-smart, wooden neighbourhoods in the world emerges.

We are in Hagastaden, the new district that connects Stockholm with Solna. There are plenty of conventional concrete high-rises around here, but on the most complex site, a couple of blocks are being completed that stand out in several ways. Suddenly there is a scent of the forest in the middle of the city.

“It’s great to work with these exciting buildings and make history here. I’m convinced this is the way forward for building multi-family housing,” says Nanita Brar, supervisor for frames, facades and roofs at contractor Veidekke.

The development is called Cederhusen (Cedar Houses) after the cedar shingles being used on the facades. The cedar itself is eye-catching for its vibrancy and the way it brings out light and shade, but what makes the buildings unique above all is the mass timber frames.

For the first time in Sweden, an entire residential block is being built in cross-laminated timber, or CLT as it is also known. The frames have been produced by Setra and come directly from the company’s factory in Långshyttan in southern Dalarna.

Amanda Roberg at Setra has been involved in the deliveries since last autumn – first as project coordinator, then as project manager. “It’s great to be part of this unique venture. Cederhusen is a clear symbol of efficient and more climate-smart construction,” she says.

"This is the way forward for building multi-family housing.”

One of the main challenges of the project has been finding the best possible solutions for this unusual plot. Cederhusen is being built right on top of the tunnels where the E4 highway passes under Hagastaden. “You can’t build in the traditional way in a place like this. Materials other than wood are too heavy,” points out Nanita Brar.

However, the predominant benefit that she emphasises is the positive climate effects of all the wood used in the buildings. Wood is not only a renewable building material – it also captures and stores carbon dioxide from the atmosphere.

The raw material for Cederhusen comes from forests in central Sweden, is processed at Setra’s sawmill in Heby and is then refined at the CLT factory in Långshyttan. “The focus is on sustainability at every stage. Throughout the supply chain, there is close cooperation to reduce the climate impact of the build,” explains Amanda Roberg.

One example of this is that Setra can offer fossil-free transport via the Ernsts Express haulage company. Another example is that Setra manufactures CLT to the exact dimensions required by Veidekke, which both reduces material waste and makes the construction process more efficient. This is particularly important in a densely populated area like Hagastaden, where there is little space for transport and unloading. The quick and easy assembly of the frames in turn contributes to a better working environment on site.

“Now we don’t have to underpin the walls. At the same time, we avoid concrete dust and get a cleaner and warmer indoor climate. Another advantage is that it’s easier and faster to secure fixings in wood than in concrete. And if anything needs adjusting, you just get out the chainsaw,” says Nanita Brar.

Jörgen Stattin, foreman at Veidekke, is also proud of the innovative blocks that are now taking shape in Hagastaden. “It’s great to be able to challenge the construction industry with new, sustainable initiatives. Cederhusen is generating a lot of valuable experience for the future,” he says.

Interest in large-scale wood construction is currently high, both in Sweden and abroad, while Cederhusen is also an example of how keen people are to live in modern wooden homes.

In August 2022, Charlotta Theander and her family will move into their apartment in the first of the Cederhusen buildings. Charlotta, her partner Helene and children Loui (almost three years old) and Ziggy (seven months) have chosen to leave a turn-of-the-century apartment in Birkastan for a newly built four-room apartment a few blocks away.

“It was friends in Hagastaden who told us about this lovely wooden development. We were a little late to the party and discovered that most of the units had been sold, but when a cancellation came up, we went for it straight away,” says Charlotta Theander.

Since then, she has walked past the building almost every morning.
“It’s exciting to watch this little oasis grow out of all the hustle and bustle above the E4. The fact that it’s also a climate-smart home is a huge bonus,” she adds.

Structural frame in CLT, except for the two lowest levels, which are built in concrete.

Elevens of the 13 storeys in the tallest Cederhusen block are made of CLT. 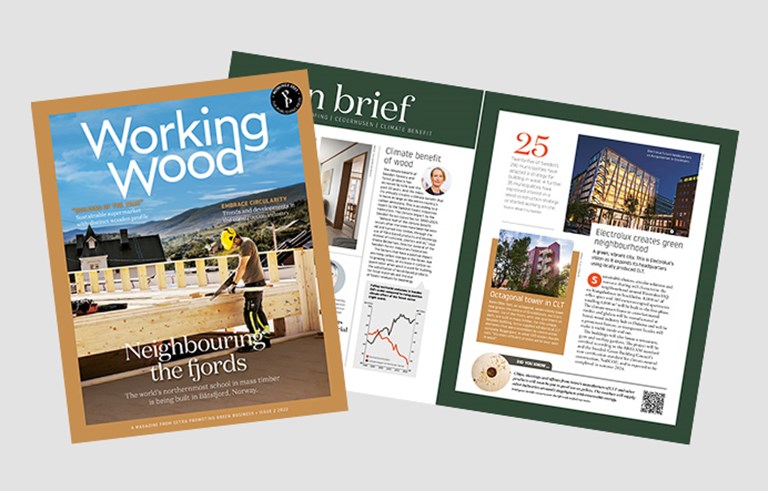