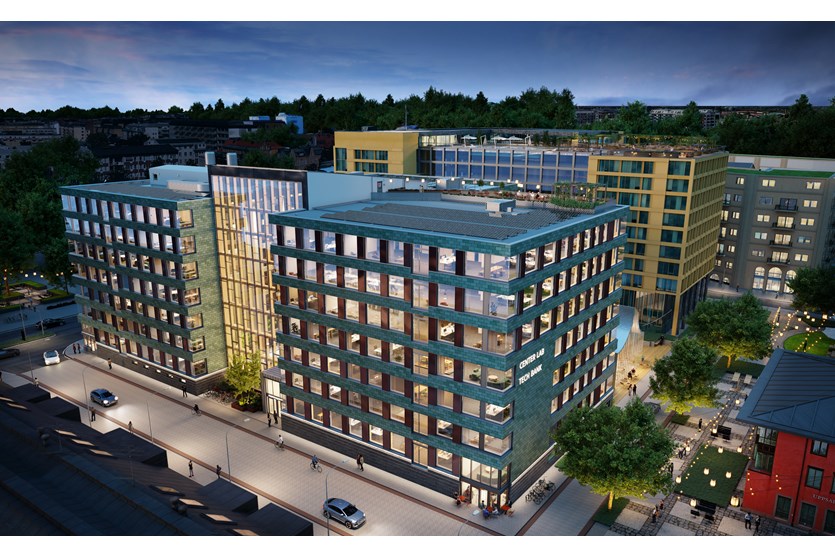 Setra has been commissioned to supply locally produced cross-laminated timber and glulam for the Lumi district in Uppsala. There, Vasakronan is transforming a 1970s concrete building into state-of-the-art and more sustainable office space.

“This is the first time we’ve worked with Vasakronan, and it’s been great. They have a clear environmental and sustainability profile and are at the forefront of the circular economy and reuse,” says Theres Jansson, sales representative for Setra’s building solutions.

The Lumi district in Uppsala is part of the Södra city urban development project that is taking shape between Resecentrum travel centre and the Fyrisån river. An existing office building is to be extended by three floors without making changes to the foundations. The solution is to dismantle a very heavy concrete facade and replace it with much lighter material.

“By using timber beams made of cross-laminated timber instead of concrete, we save weight. And as we’re dismantling the concrete facade at the same time, there’s no need for underpinning,” explains Vasakronan’s project manager Jonas Wahlström.

In the construction industry, Vasakronan has made a name for itself by taking responsibility for purchasing and production, in cooperation with its own consultants. Careful preparatory work is carried out prior to each individual procurement.

“In our procurement dialogue, we make an assessment based on a wide range of parameters. These include sustainability, digital maturity, geographical proximity and security of supply. It’s important that we have suppliers that provide security for us as customers, and that was one of the reasons why we chose Setra.”

“Another reason was that Setra’s employees were very helpful, clear and solution-oriented when we were reviewing their tender. Also, Setra met our technical requirements, including those for the weight of materials,” says Jonas Wahlström.

Lumi will consist of three blocks connected by an atrium. There will be a total of seven floors with approximately 15,500 square metres of open and bright office space. The street level will be redesigned to accommodate small shops, restaurants and other services.

About Setra’s production facility for cross-laminated timber
The production facility for cross-laminated timber is part of the Setra Timber Industry Centre in Långshyttan, southern Dalarna. The site also produces glulam and wood components. Setra’s value chain from the forest to the finished wood products is extremely short, delivering a low carbon footprint. From the factory in southern Dalarna, transport to Greater Stockholm and Mälardalen is handled by a haulage company that only uses biofuels. The structural elements are delivered in exactly the right order for highly efficient assembly on site.

About Lumi
The architect behind Lumi is Anders Tväråna of White Arkitekter. Lumi is Latin and means “light of life”. The property is located in Uppsala’s Södra city, a new, sustainable district being developed by Vasakronan in collaboration with the Municipality of Uppsala. The goal is for Lumi to achieve LEED Platinum environmental certification, the highest in the international LEED system. One example of the sustainability focus is Vasakronan’s investment in a large-scale recycling system using a carefully digitised process. Much of the existing 1970s building will be dismantled and reused, including plaster walls and ventilators.